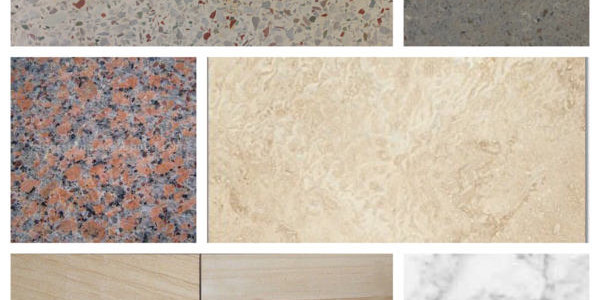 Not Sure What Type Of Stone You Have? We Can Show You The Difference!

Identifying the type of stone or tile is the first step to cleaning and sealing it effectively. But it’s not as easy as it sounds. There are many different kinds of natural stone, as well as an endless range of man-made tiles that are designed to look just like natural stone. This guide is designed to help you figure out what kind of surface you’re dealing with.

Ten years ago, tiles looked like tiles. They were quite obvious, and quite distinct from stone. However over the last 5 years manufacturers have been striving very hard to replicate natural stone in a man-made format.

First, take the following steps to identify whether a surface is natural or man-made

Look at the back

The simplest way to confirm whether a tile is natural or man-made is to turn it over. Find a spare tile if one is available, and look at the back. If it has a uniform cross-hatch grid pattern on the back, or imprinted writing, then it’s man-made. However if the front looks generally like the back (perhaps with a rougher finish) then it’s much more likely to be natural stone.

Look at the edges

If spare tiles aren’t available, it’s also possible to find clues by looking closely at the edge of a laid tile. If it looks like it has saw marks or machine marks, it’s more likely to be natural stone. Man-made tiles are usually fairly uniform in colour and texture, and have edges that are either sharper (as with a porcelain tile), or more curved with a raised central section (as with a ceramic tile).

Take a step back, and look at the whole surface to see if there are any repeated patterns. Nature does not repeat – every natural stone is unique. However man-made replications will have a repeating pattern. The higher the quality tile, the less frequently the pattern will repeat, so you may need to look at the surface as a whole to identify them.

If these steps don’t give any indication of stone/tile type, it’s time to refer to our guides below

Marble is famous for the veining pattern that runs through every piece in a non-repeating pattern. As well as veining, marble will have natural variations in colour and gloss level across the surface. Common marble colours include white, white and grey and beige. Strong coloured marble is also available, including greens, reds and blacks, but these are less common. The best identifier that they are marble is the heavy veining pattern that usually covers them. The rarity of these colours makes them more expensive, so they tend to be used in feature areas, benchtops, and vanities, and usually come in a high shine finish.

Limestone is often beige, light brown, or light grey in colour. Limestone doesn’t have strong veining, but it does have what looks like a colour wash: the natural colour varies through the stone. Limestone is often provided in satin or semi satin finishes, and occasionally matt. If it’s polished to any degree, it won’t show the same level of gloss consistency across the surface as marble. Limestone is occasionally mistaken for marble. This isn’t an issue, as both are calcium-based stones and therefore are generally cleaned and treated using similar methods. You are unlikely to damage limestone by cleaning it as though it’s marble, and vice versa.

Travertine, to identify travertine, look for the holes. Travertine, in its natural (unfilled) state, has decent-sized pock marks covering the surface that can be bigger than a 50c piece. Travertine is usually provided ‘filled’, where a matching colour filler such as a grout or epoxy is used to fill in the pock marks. Travertine is most commonly available in beige or light brown, and popular finishes include semi satin or matt.

Basalt/Bluestone, this grey to dark grey stone has a blue tinge to it, hence its name. Basalt / Bluestone has consistent colouring, without veining, and can be seen to be quite grainy on the surface. On close inspection, you may also be able to see minute visible pores. Bluestone is usually provided in a matt or rough finish such as bush hammered or flamed.

Basalt / Bluestone can be mistaken for granite – and sometimes it’s even sold as granite. However its characteristics are quite different from granite and it cannot be cleaned or treated in the same way without potentially damaging it.

Granite comes in every colour you can imagine, but the most common are darker colours such as blacks, reds, and sometimes blue. Lighter colours such as whites, golds and beiges are also available. Granite has a grainy structure, but without the visible pores you see in basalt / bluestone – it’s a much denser stone, therefore it can achieve a much finer, higher-polished finish. Granite is generally supplied in a polished finish in most internal installations. If it’s a polished natural stone, and it’s a full strong colour with visible grains but without veining, it’s likely to be granite.

Sandstone, if it’s the colour of sand, looks like sand, and feels like sand, it’s likely to be sandstone. Sandstone is very grainy, and is made of extremely fine sand grains. Sandstone always comes in earthy colours such as yellows, beiges, browns and greys, and it can sometimes have strong veining where other minerals have mixed with the sand as the stone has been created. Sandstone does not polish well, so it is almost always provided in a matt finish. Sandstone can sometimes be mistaken for limestone, but it doesn’t respond to cleaning in the same way so care should be taken to identify it properly.

Slate is easily identifiable by the distinctive layered surface texturing that is exclusive to slate. In terms of colours, it is usually grey or black, but can occasionally be red, yellow or even greenish. Slate is often treated with a coating system during installation, so if it’s a dark coloured layered-looking stone with a surface coating applied, it’s probably slate.

Guide to Man-made tiles and stone

Porcelain/Ceramic Tiles, there is an infinite variety of colour and patterns in porcelain and ceramic tiles. If the tile is clearly a tile (like a white ceramic tile, for example) it’s easy to identify. But if it’s replicating a natural stone, it’s much harder to tell. As the tile is coming out of a man-made mould there will be a repeating pattern – in less expensive tiles this could be repeating per tile, and in more expensive it could be over a dozen or more tiles before it repeats. Ceramic and porcelain tiles generally have a smooth, non-textured surface. Sizes cover everything from tiny mosaics to large 1200mm x 1200mm tiles. If it’s a man-made tile with sharp, square edges, it’s likely to be a full-bodied porcelain tile. If it has slightly rounded edges and a glazed finish, it’s probably a ceramic tile.

Mosaics are tiny tiles, these can be virtually any material (glass and metal are common) but most often they are either ceramic or porcelain tiles. Mosaics are invariably glazed, with a consistent pattern and colour. They’re likely to be artificial colours (mosaics don’t usually try to replicate natural stone) and are commonly used on features.

Terracotta literally means ‘baked earth’, and that’s what it is – baked clay. Terracotta can be identified by the distinctive earth colouring, with orange, yellowy-brown, and earthy reds being most common. Terracotta often comes in smaller sizes, 400 x 400mm and smaller. If you turn a terracotta tile over, there will be visible extrusion patterns across the whole tile where it has been squeezed out of the mould, or if it has been hand-moulded it will have misshaped edges. Terracotta is always a matt finish unless it has had a coating applied.

Terrazzo is a composite made of a mixture of lime and stone chips. It can be supplied as tiles, or less commonly it can be poured in slabs on the floor. Terrazzo has no veining, but the stone chips or pieces are visible in the surface. Terrazzo is usually a semi satin or matt finish. Terrazzo can also be supplied in a polished finish if it is made with a resin (rather than lime), but this is generally only used in commercial environments such as shopping malls.

Engineered Stone, these are the brand-name stones such as Caesar stone, Quarreller, Rover, Essastone, Quantum Quartz and so on. They are basically a resin-based terrazzo (composite of stone dust or chips and a resin) marketed under a specific name. Engineered stone is most commonly used on benchtops and vanities where acid damage and etching is an issue for a natural stone surface. Engineered stone is also commonly used on commercial flooring. Companies that make engineered stone are now very accurately replicating natural stone that can easily be mistaken for the real thing.

Cancel reply
Next Post
Design & SEO by S.M Consulting
Back to Top